Finding a decent coffee machine can be tricky; most models either come supplied with a ton of features that you’ll use seldom or never, or pack a small, straightforward set of features and settings that simply aren’t versatile enough to cater to your needs.

Keurig’s Line 2.0 series houses some of the best coffee makers on the market, and we’ve picked out K200 & K300 as its representatives.

Keurig’s K200 is a lightweight and portable coffee brewer; its dimensions measure 15 inches by 9 inches by 13.7 inches and it weighs roughly 7.5 pounds. It’s made from highly durable plastic and stainless steel materials that can withstand quite some pounding too, so you shouldn’t worry too much about its durability. 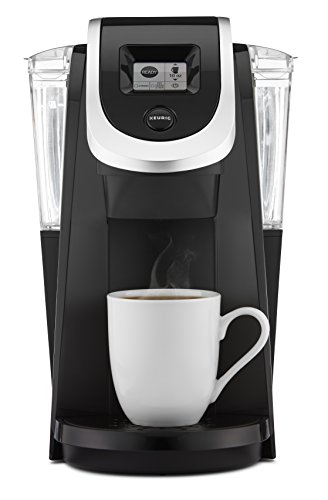 You’ll be able to brew coffee in ten different sizes, starting from mere four ounces to thirty ounces. Its water tank can hold up to forty ounces, which is more than sufficient. On top of that, it sports a big 40-ounce water tank, and a very convenient feature called the ‘strength control’. This particular setting allows you to specify the ‘strength’ of your brew.

The K300 isn’t too different from Keurig’s K200, although it does bring a bit more variety to the table.

Some of the most notable features K300 sports, just like K200, include the big water reservoir, selectable brew size settings, brew ‘strength control’, and the mug sensor.

Mug sensor is probably the most interesting feature both K200 and K300 come supplied with. Basically, it preserves the temperature of the mugs for longer periods of time, allowing you to

Keurig’s K200 and Keurig K300 are very much alike. The features both models come supplied with utilize identical technologies, which is only to be expected not only because they are made by the same brand, but also because they belong to the same generation – the Line 2.0.

This particular series of Keurig brewers boasts the same quality of coffee brewing, regardless of which model we look at, so that’s the first, and obviously most important similarity that Keurig K200 and Keurig K300 share.

Both of these models come supplied with a very user-friendly touch-screen display that is remarkably easy to navigate. Although the buttons and settings are located on different spots, they are both incredibly easy to use.

Versatility wise, Keurig’s K200 and Keurig’s K300 both feature ten brew settings ranging from four to thirty two ounces. On top of that, both models are fully compatible with all the pods from the Keurig Line 2.0 series.

Lastly, this is both a similarity and a difference – Keurig’s K200 and Keurig’s K300 are also fully compatible with Keurig’s patented carafe; however, K200 does not come supplied with one.

Even though these coffee makers have a lot in common, they also have a great deal of differences between them.

Additionally, the K300 has a bigger water tank and is better suited for larger offices and commercial use. While K200 is also suitable for coffee shops and baristas, the smaller tank demands more frequent refills.

The K200 and K300 are designed in a relatively similar way. However, K200 is obviously a bit more compact and smaller as it features a 40 ounce water tank (20 ounce less in comparison to K300) and doesn’t come supplied with a Keurig’s patented Carafe.

In terms of storage, the smaller K200 takes up less space. K300, on the other hand, is not too big, and it offers a bit more versatility due to the addition of Carafe.

Construction wise, both K200 and K300 are remarkably durable. They’re made from exceptionally sturdy plastic and stainless steel materials, and both models can endure plenty of use and abuse.

When it comes to brewing quality, all Keurig brewing machines from the Line 2.0 generation perform the same as they sport the same motor and technologies. Of course, K200 and K300 are not exceptions.

We should note that Keurig’s K brewing machines are equally suited for brewing any kind of hot beverage, including cocoa and hot chocolate; every type of hot drink you want to make using K200 or K300 will be of consistent quality.

One of the main differences between K200 and K300 is the size of the water tank. Namely, K200 features a 40 ounce reservoir while Keurig’s K300 sports a 60 ounce tank.

Even though you could say ‘bigger is better’, most baristas don’t complain about the 40-ounce reservoir. The bigger tank does bring a bit of extra convenience to the table, but it is also responsible for the bigger size of the machine at the end of the day.

There aren’t many differences between Keurig’s K200 and K300 in terms of the features they come supplied with. Both of these brewers sport a neat little display, an automatic shutdown feature, a water tank, strength control, and selectable brewing strength.

The first and most obvious difference between these models is that K300 features a Carafe while K200 doesn’t. If you want you could purchase it separately, but that will bring the price of these two models somewhat closer.

Another difference between the main features of Keurig’s K200 and K300 coffee makers is that the latter features improved water filtration technology. To be perfectly honest, the K200 already has a great water filter, but K300 offers a bit more reliability and works slightly faster.

Obviously, like we’ve mentioned before, these coffee brewers have differently sized water tanks, but as far as the rest of the feature set goes, everything is pretty much the same.

Durability is an important aspect of coffee brewer’s performance. Flimsy models usually don’t last for longer than a month or two, and since these little contraptions can be quite expensive, you wouldn’t want to invest in something that gets broken so easily.

Keurig’s K200 and Keurig’s K300 are both built like tanks. They feature lightweight plastic base reinforced with a stainless steel frame for additional sturdiness. Since they’re made from the same materials and feature a highly similar design, their durability rating is pretty much equal.

In short, Keurig’s K200 is a wonderful economical coffee maker. It doesn’t cost too much, and even though it doesn’t come supplied with a carafe, it still packs quite a punch for the buck. If you don’t mind the extra refills due to the smaller water tank, this might be a perfect option for you.

Keurig’s K300 is, sadly, a discontinued product. Even so, there are numerous dealers to be found on various online marketplaces, such as for example Amazon or E-Bay. Those interested in purchasing the K300 can’t do so on Keurig’s official website, which is its main downfall.

On the plus side, this model is superior to K200 and K250 in a lot of ways. Although both of these models are pretty much the same in terms of design, features, and durability, K300 boasts a larger water tank reservoir and comes supplied with the Keurig’s patented carafe. Additionally, you’ll also get to reap the benefits K200 and K250 provide.

The final decision was pretty easy to make. Even though both Keurig’s K200 and K300 are commercial grade coffee makers, the K300 clearly comes supplied with superior features, even though it does come at a slightly less approachable price.

With the addition of carafe and a bigger built-in water tank, it tops the performance of K200 by hair’s length. We recommend it to people who’ve had at least some experience with Keurig coffee making systems, and who don’t want to waste precious time by refilling the water reservoir every couple of minutes.