The Belwares French Press is a sleek spin on the classic French press design. The elegant black finish gives the press a stylish look that will compliment any decor.

With a double wall design and vacuum seal, the Belwares French Press features a stainless steel construction that makes it durable. Lots of people struggle with glass presses and end up breaking them. Save yourself the time, effort and frustration while saving money with a stainless steel press that won’t break when you drop it and it keeps working use after use. 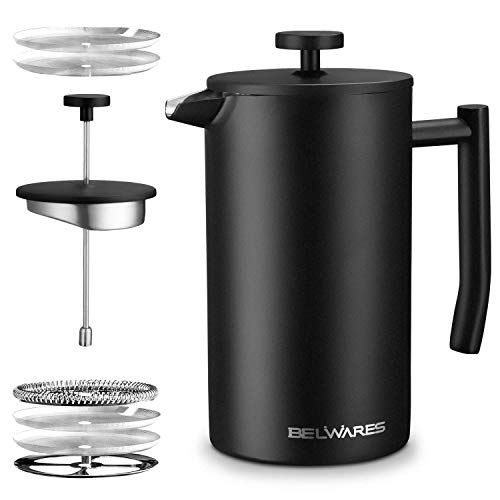 The price point is very good, coming in at less than $50 while offering one of the largest capacities of any French press on the market.

Features of the Belwares French Press

Here are some of the main features of the Belwares French Press:

Pros of the Belwares French Press

The Belwares French Press offers one of the largest presses on the market, making it a great option not only for coffee enthusiasts but for large groups, camping trips and families. Steeps coffee after five minutes.

Using a French press saves money, as there is no need for coffee filters and the Belwares design extracts every bit of flavor from the grounds so that there is no waste.

The layered screen system allows for the use of fine coffee grounds, which isn’t what the press is designed for, but there are some coffee enthusiasts who prefer a fine grind to coarse grinds, which are optimal for use with French presses. Having the option to use different grounds is a great thing for people who like to experiment with their coffee.

Thanks to the double wall construction, the coffee retains heat longer than a traditional glass press. It’s also a versatile press that can prepare several drinks, like hot chocolate and tea, in addition to coffee.

Cons of the Belwares French Press

After regular use, the finish will start to come off over time and destroy the elegant look of the press. While the finished product is a good cup of coffee, the design of the lid causes large pots to lose their temperature faster than models with a sealed lid. (If you’re brewing one cup at a time, or using the whole pot from the start, then this won’t impact the way you use it)

Here are some of the positive things that customers have said about the Belwares French Press:

Not all of the feedback was favorable. Here are some of the negative things that customers have reported:

In general, the Belwares French Press is a good product for the price, but if you’re buying it for the look of the design be advised that the finish can wear off after consistent and regular use. Look aside, the Belwares French Press features a sturdy design that will help to keep it working longer than glass presses, and the double wall technology keeps your coffee hot longer than traditional models. Overall, this French press is a great gift idea for the coffee lover in your life, and it’s a great starting point for anyone looking to move from drip coffee makers to using a press.